This season in Australia as far as food is concerned seems to be all about Chocolate with the occasional hot cross buns. The stores are loaded with lots and lots of Chocolate. And NONE of it is safe for Jaden. The only one that attempts to be Allergy Friendly has Soy in it. Anyway the girls went to Church yesterday and made Hot Cross Buns and Chocolate molds. Well we did the Jaden-safe Hot Cross Buns yesterday. Today I attempted to make some Jaden-safe Allergy Friendly “milk” Chocolate. Unfortunately I don’t have a full recipe as I didn’t measure pretty much anything, but here is what I did. I started out with an Artisse Dark Chocolate bar. I melted it in a double boiler (Pryex bowl over a sauce pan with water in it). I added about 3 Tablespoons of Prepared Darifree and at least 6 tablespoons of powdered sugar and another 1/2 tablespoon of Darifree powder and stirred with a small wisk. I had added a little Olive Oil but it needed something that would be solid at room temp in it like Cocoa Butter, Palm Oil, or Lard. We had the Lard in the house so I added it after the first pour turned out to be a failure. We also dipped some gluten-free marshmallows in the chocolate to use it up. I did swipe a little Olive Oil on a paper towel and lightly swiped the oil in the mold before the successful pours. So the first pour needed more solid fat and some Olive Oil on the molds. The first pour is the “failure” pic below. Pour is a strong word, I actually spooned it in then tapped them on the counter. I would have made different shapes, but this was the only mold we had and we had borrowed it from someone else. I am considering wrapping the eggs in aluminium foil for presentation to Jaden so it looks more “normal”. [caption id=”attachment_144” align=”alignnone” width=”150” caption=”Successful Eggs”] 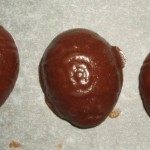 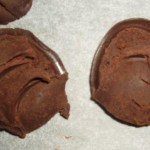