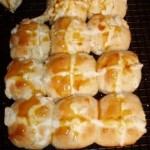 [/caption] Jaden and I baked Hot Cross Buns….We used Gluten-Free Flour and more or less followed the recipe substituting Darifree for Soymilk at http://www.everydaywithallergies.com/2009/03/hot-cross-buns.html. We also substituted 1/4 tsp Nutmeg for the 1 tsp Cinnamon. Best thing is that Jaden likes it. edit: 2012 - We no longer need to substitute Nutmeg for Cinnamon as Jaden seems to have no reaction to Cinnamon anymore. :-)