I have missed French Toast for the past 5 years. Finally I decided that with some extra regular bread I just needed to have some French Toast. Therefore I came up with the following after some trial and error and googling. In general if I can’t make something similar for Jaden I won’t have the original in front of him. Usually we eat whatever he eats except when it is quite cost prohibitive. Well this is one of them as the bread slices we use for this recipe cost in excess of $.50 each and are half the size of normal store bought bread. But really any bread that you can eat can be substituted in this recipe. Jaden LOVES it! [caption id=”attachment_225” align=”alignleft” width=”150” caption=”Eggless French Toast on a plate”] 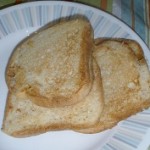 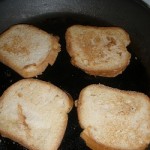 1 tsp of No Egg (or just cornstarch) 1/2 cup of prepared Darifree (or other non-Dairy Milk) 1/4 tsp of GF Vanilla Extract 4-8 pieces of acceptable bread. (Lately we have used Schär Pan Carré, which isn’t sold in the US and their products in US have Soy in them. The first time we used Sol Bread Pumpkin loaf.) Place non-stick or oiled pan on stove and place on med-high heat. Wisk the first three ingredients in bowl large enough for the bread to fully be able to go into the bowl. Using a fork or your fingers place a slice of bread into the liquid and let sit for a few seconds, then flip over the bread and repeat. After making sure the pan is hot enough, by placing a drop of water or drip off the mixing wisk and hearing a pleasant sizzle, place the slice of bread on the pan. Repeat for the number of pieces of bread that the pan can hold without overlapping the bread. After about 2 minutes you should be able to flip the bread over to brown the other side. Remove when both sides are a pleasant golden brown color and place on plate. Top with favorite topping such as Real Maple Syrup, Margarine and sprinkled Powdered / Icing Sugar, Strawberry Syrup, or any suitable fruit topping.